What makes you more likely to end up In the emergency room for dental problems? The answer may surprise you.

Use Your Voice as an Ally
From Minnesota to Louisiana
Bi The Way
The “Aha” Moment that Helped Lead to Expanded, Integrated Dental Care in Virginia
DentaQuest Announces 2021 Health Equity Heroes: Champions of The Pandemic
DentaQuest To Celebrate First Annual Health Equity Hero Day

What Makes You More Likely to End Up in The Emergency Room for Dental Problems?

Adult dental benefits are not currently included in Maryland Medicaid – which means emergency departments (EDs) in the state see a lot of oral emergencies. Though Medicaid recipients only represent 15% of the total adult population in the state, they make up more than half of the adults who come to the ED for dental-related conditions. Young, black women visit the emergency room at a higher rate than any other group.

Why is this occurring? Several studies by the DentaQuest Institute dug deep to understand the scope and scale of the problem and disparities in emergency department visits.

ED costs have always been an expensive part of providing Medicaid coverage. This is particularly true in Maryland, where adults enrolled in Medicaid who are not pregnant or disabled are currently only eligible for limited emergency dental services.

Medicaid will only cover costs for using the ED for treatment dental conditions by these patients, which means the hospital tends to be the only access point for oral health care. This places a hefty, and costly, burden on the medical system.

These costs are steadily rising. In 2014, ED visits for dental needs cost the U.S. $1.8 billion and, for the first time, Medicaid paid the largest portion of these costs – 41%.

Leaders from both houses of the Maryland state legislature recognized the impact that these charges are having on the Medicaid payment system and, through targeted work with the Maryland Dental Action Coalition (MDAC), commissioned the DentaQuest Institute to conduct an evaluation in late 2017.

The Institute found that costly dental emergencies were very specifically a Medicaid trend. More than half (53%) of the 42,327 emergency visits for a dental condition in 2016 were by Medicaid recipients.

Medicaid was charged more than $11.3 million for ED visits for a chronic dental condition in 2016. Average charges were $446 per patient per visit. Because of the limited dental care expertise of emergency room staff, most treatment is limited in scope only to palliative care. This means that often an antibiotic or opioid prescription, or both, is the only treatment that can be provided and core problems are not addressed. The analysis made clear that the current system is not working for participants or taxpayers.

This cost includes a quarter of Medicaid recipients who returned to the ED more than once. Incredibly, 145 patients had cases so severe they were unable to be discharged home and they were admitted to the hospital for more definitive treatment. Between 2013 and 2015, 15 adults died in the hospital after admission for a severe dental condition – all conditions that could have been prevented with timely dental care. 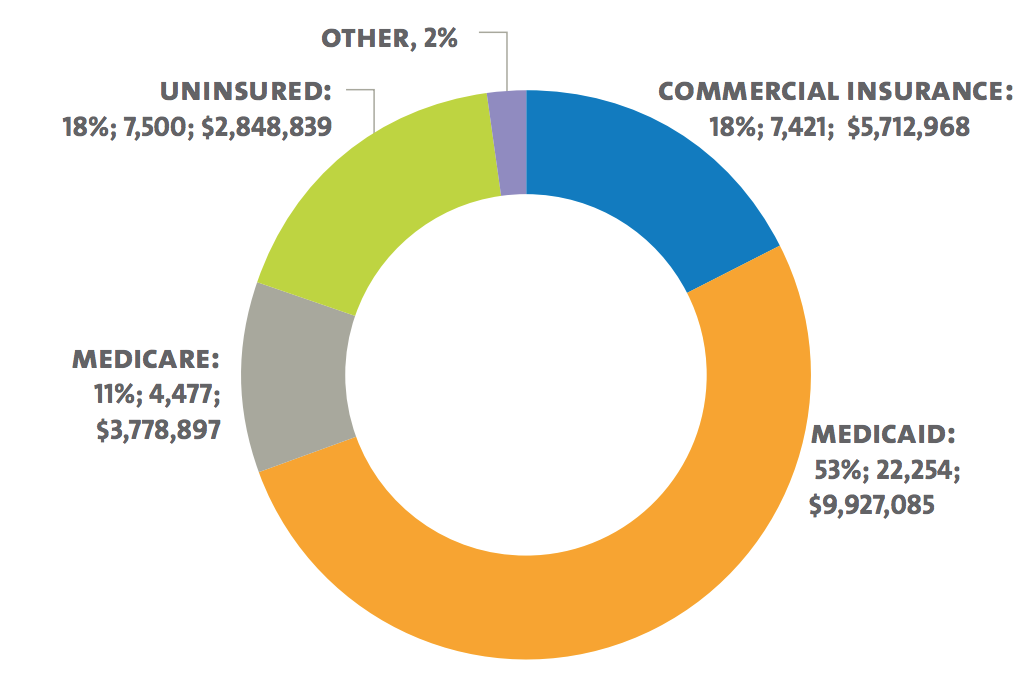 What is driving emergency room use for dental care?

Authors of the DentaQuest Institute studies found that while race and gender were correlated to whether people went to the ED, the primarily influence on the likelihood of these emergency room visits was income. Residents of low-income zip codes were discharged for an oral health condition more often than their higher-income counterparts. And black residents disproportionately reside in those zip codes.

With this data in hand, the State of Maryland is moving to limit these health disparities. On May 15, 2018, Governor Larry Hogan signed SB 284 into law, paving the way for an adult dental benefit Medicaid pilot program.

The concentration of the black population in relatively low-income, urban areas of Maryland has direct consequences on dental treatment and services.

More than half of Maryland’s black population live in counties that are below the median rate for dentists present in the population. This, in addition to other factors examined, made it clear to researchers that race was not the sole significant factor for the likelihood of an ED visit for a dental condition.

Income, location and access to dental care, on the other hand, made all the difference.

“Emergency departments are very accessible and will treat patients regardless of their ability to pay," says Avery Brow, who supports research at the DentaQuest Institute. "They become the only option for patients with no other way to access or pay for needed dental care when an emergency develops.”

Brow says that the cost of care for a dental complaint is borne by the medical payers, both private and public. This is overwhelmingly so in a state that does not offer comprehensive dental benefits to adults. A better alternative for these individuals would be to provide affordable, higher-quality care focused on longterm outcomes – before those issues reach the point of crisis.

How is Maryland working toward a solution?

“The single most important step to improve the oral health – and overall health – of Marylanders is a Medicaid program that covers dental services for adults,” said Mary Backley, the Maryland Dental Action Coalition executive director, in an MDAC news release. “Maryland has become a model for the nation in improving the oral health of children. The passage of SB 284 is an important step forward as we work to do the same thing for adults.”

SB 284 authorizes the State of Maryland Department of Health to implement a pilot program for adult dental coverage within the dually-eligible Medicaid population, beginning as early as January 2019.

As Maryland moves forward to find new solutions for the well-being of its residents, other states should take note.

“Emergency department discharges mirror national trends," says Tequila Terry, executive director of the DentaQuest Institute. "A successful deployment of Maryland’s pilot program could lead to adoption in other states across the country. That would result in millions of dollars in national savings, and, most importantly, result in a stronger and healthier nation.”

To learn more about whether a prevention-based model is a fit for your state, read about Oregon’s human-centric model and contact us directly for more information.

DentaQuest Based in Boston, Mass., DentaQuest (www.dentaquest.com) is a leading national oral health company and the largest in the Medicaid space. Along with its charitable DentaQuest Foundation, its clinical DentaQuest Care Group and its educational DentaQuest Institute, its mission is to improve the oral health of all. Follow DentaQuest on Twitter @DentaQuest, Facebook at www.facebook.com/DentaQuest and LinkedIn at www.linkedin.com/company/DentaQuest, and stay up to date at WhatsNew.DentaQuest.com.