New poll: Adding dental coverage to Medicare is so popular it could sway voters in the Democratic primary

New poll: Adding dental coverage to Medicare is so popular it could sway voters in the Democratic primary

Polling done for Oral Health for All, a campaign to expand access to oral health coverage needed to keep Americans healthy, led by Families USA and the DentaQuest Partnership for Oral Health Advancement 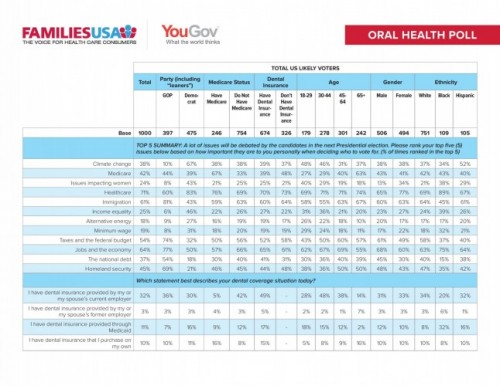 A new poll has found broad national support for adding dental coverage to Medicare, along with indications a candidate’s stance on the issue could sway votes nationally and in the upcoming Iowa presidential caucus.

The Families USA/YouGov Poll found seven out of 10 likely voters support adding oral health coverage to Medicare. Majority support for adding the benefit was found in both parties and across every age group, race, ethnicity, gender, region and ideology.The poll was fielded nationally and in Iowa this month and found even higher support among Iowa Democrats, who will be winnowing a crowded field of presidential hopefuls. Eight in 10 Iowa Democrats favor adding a dental benefit to Medicare, and two-thirds say they would be more likely to support a candidate who shares that position.Many candidates have publicly supported filling Medicare’s longstanding gap in dental coverage, but not all of them. The Oral Health for All campaign, led by Families USA and the DentaQuest Partnership for Oral Health Advancement, lists 11 of the 21 major Democratic candidates as publicly supporting adding dental coverage to Medicare, either as part of their health care plan, in public statements or in response to the group’s inquiries. (See chart below).Almost two-thirds (64%) of Democrats nationally said they would be more likely to support a candidate who pledged to add dental benefits to Medicare. The number was even higher (70%) among voters who favor Medicare for All. Nationally, nine out of 10 Democrats (91%) agreed that dental benefits should be included in any health care system implemented.

“People are really concerned about oral health. It’s a nonpartisan issue that people support regardless of political party,” said Patrick Willard, senior director of state and national strategic partnerships at Families USA. “They know their oral health is critical to their overall health, and it’s like the government is saying, ‘we don’t think you have teeth.’ Well, most Americans now keep their teeth well into old age, and they need access to dental coverage in order to take care of them.”

Most voters (79%) indicated they would be willing to pay for dental coverage, though 51% said that would depend on the cost.

Democrats in Iowa were even more supportive with 82% favoring the change. Nearly four in 10 Iowa Democrats (37%) ranked dental coverage as the missing Medicare benefit most important to them personally, more than vision care, nursing home care, hearing aids, cosmetic surgery or fitness programs. Two thirds (66%) said they would be more likely to support a candidate who pledges support for Medicare dental.

Nationally and in Iowa, health care remains a top issue for voters, reported by 7 in 10 (71%) to be one of their top five issues. For many, oral health appears to be part of that picture: Nationally, eight in 10 likely voters (80%) agree that access to health care should include access to dental care. Two-thirds of Republicans and 91% of Democrats agreed with that statement.

National representativeness was ensured by using sample-matching methodology and propensity score weighting. The YouGov sample-matching methodology is a three-step process designed to select representative samples from non-randomly selected pools of respondents, such as opt-in online panels. First, YouGov data scientists create a population frame using Census data, along with auxiliary data from high-quality government data sources. This frame becomes the target(s) for the recruitment. Second, the sample is recruited based on matching to the frame using a set of interlocking demographic variables. Third, once the survey data collection period has closed, the recruited sample is cleaned for quality control and then matched against the frame using the full set of variables. This effectively discards those respondents that are over represented in the sample. Finally, any differences between the survey data and sampling frame are adjusted using propensity score poststratification weights.

The poll was conducted for Oral Health for All, a campaign to expand access to the oral health coverage needed to keep Americans healthy that is led by Families USA and the DentaQuest Partnership for Oral Health Advancement.

About Families USA Families USA, a leading national voice for health care consumers, is dedicated to the achievement of high quality, affordable health care and improved health for all.

DentaQuest is a purpose-driven oral health care company dedicated to improving the oral health of all. We do this through Preventistry® – our all-in approach to better care, expanded access, value-based financing, and innovative solutions. We manage dental and vision benefits for 27+ million Americans and provide direct patient care through our network of more than 85 oral health centers in 5 states. We provide outcomes-based, cost-effective dental solutions for Medicaid and CHIP, Medicare Advantage, small and large businesses, and individuals nationwide. And, we've invested more than $200 million in grants and programs to achieve measurably healthier communities across the country. By advancing prevention-focused oral health, we will achieve better overall health for everyone. Learn more at www.DentaQuest.com and follow us on social: Twitter @DentaQuest, Facebook www.facebook.com/DentaQuest, Instagram @Inside_DentaQuest, and LinkedIn www.linkedin.com/company/DentaQuest.