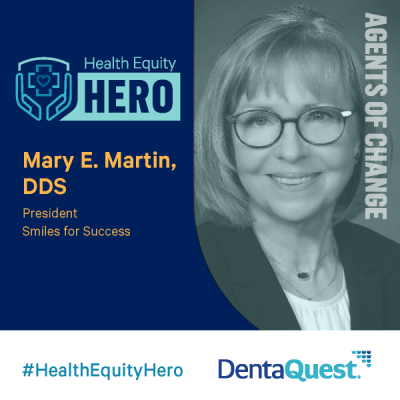 When Dr. Mary Martin saw an article written by a female dentist on battered women and oral health back in 1995, it sparked an idea and a passion that would change the lives of hundreds of women across the country. Martin and two other female dentists sprang into action, developing a pilot program for members of the Association of American Women Dentists (AAWD) to help women in crisis receive dental care — and the Smiles for Success (SFS) Foundation was born.

The program continued in various forms for two decades, until in 2017 Martin joined the board and soon after became President, taking the organization in a whole new direction. She established the Smiles for Success Foundation as a 501c3 nonprofit and worked hard to secure grant funding to ensure that the program would be not only impactful, but sustainable. Smiles for Success is based in Pensacola, Florida, but has expanded to include participating dentists in Boston, New York City, Abilene and Austin, Texas, Philadelphia, Denver and Baltimore.

Even more impressively, Martin’s efforts are a passion project — she currently works as a dentist at Caring Hands in McCallister, Oklahoma.

Today, we’re proud to honor Martin as a 2022 DentaQuest Health Equity Hero. Here, she reflects on her work and why it’s more important today than ever.

Smiles for Success has a long history, but in many ways is starting fresh. What sets you apart?

Even though we’ve been here since 1995, we’re basically a new organization. Over the last four to five years we rebranded, took the program from dental schools and returned it to private practitioners for pro bono care, became a 501c3 nonprofit and began building a new community of providers. We’ve really focused on the best way to provide free, accessible oral health care for battered women, women on welfare, in drug rehab or out of prison.

One thing that sets our program apart is that there are lots of places where people can get their care for free, but they get one thing done and that’s it. Some programs only pay for fillings and extractions, not crowns or root canals. But at Smiles for Success, we provide complete care to the patient. We’re going to make sure she has a healthy, pretty smile to go out into the public.

Why is access to oral health care so important for this population in particular?

Oral health is directly connected to overall health in so many ways, but it is too often overlooked — especially among groups that are marginalized and vulnerable. To qualify for dental services with the Smiles for Success, the woman must be in a community program, work study program, or for those previously incarcerated, in a halfway house.

These are women who are trying to rebuild their lives and start fresh, and we know that a person’s oral health has a direct impact on everything from their employment prospects to mental health and confidence.

How have you seen people’s lives changed by Smiles for Success?

It’s amazing to see the transformation in our patients. They almost always cry when they’re done. They stop covering their mouths. They stand taller. And they get to take that brighter smile and healthier mouth with them every day going forward. That’s why I wanted to build this program back. That’s why I've been so passionate, because it really makes a difference.

In recognition of Martin’s experience as a Health Equity Hero, she and Gonzalo Perez, manager of the DentaQuest case management and outreach program, were recently interviewed and featured in the Pensacola News Journal.

Perez applauded Martin’s ability to be a “disruptor” within the health care system and said, “She had the vision and the clarity to create a program, Smiles for Success, to cater to a very specific population that has been historically underserved, maybe even left behind, by the healthcare system."

When asked about what being named a DentaQuest Health Equity Hero meant to her, Martin expressed to the Journal:

“I was thrilled and I was honored. It thrilled me to know that I was going to get the opportunity to showcase Smiles for Success … I wanted to get the name out there. I'm always trying to tell people about it. It really makes me happy that DentaQuest — they are recognizing the importance of access to care and trying to get it out there to people. I mean, so many people are underserved and we're just trying to help, and DentaQuest is helping, also.”